Vietnam divided into north and south, 1954

First involvement of US forces in Vietnam, 1962

Last US Troops withdraw from Vietnam, 1973

Johnny Wright's song "Hello Vietnam", was the #1 song of 1965, and has appeared in many forms of media regarding the Vietnam War, most popularly as the introduction music to Stanley Kubrick's Full Metal Jacket 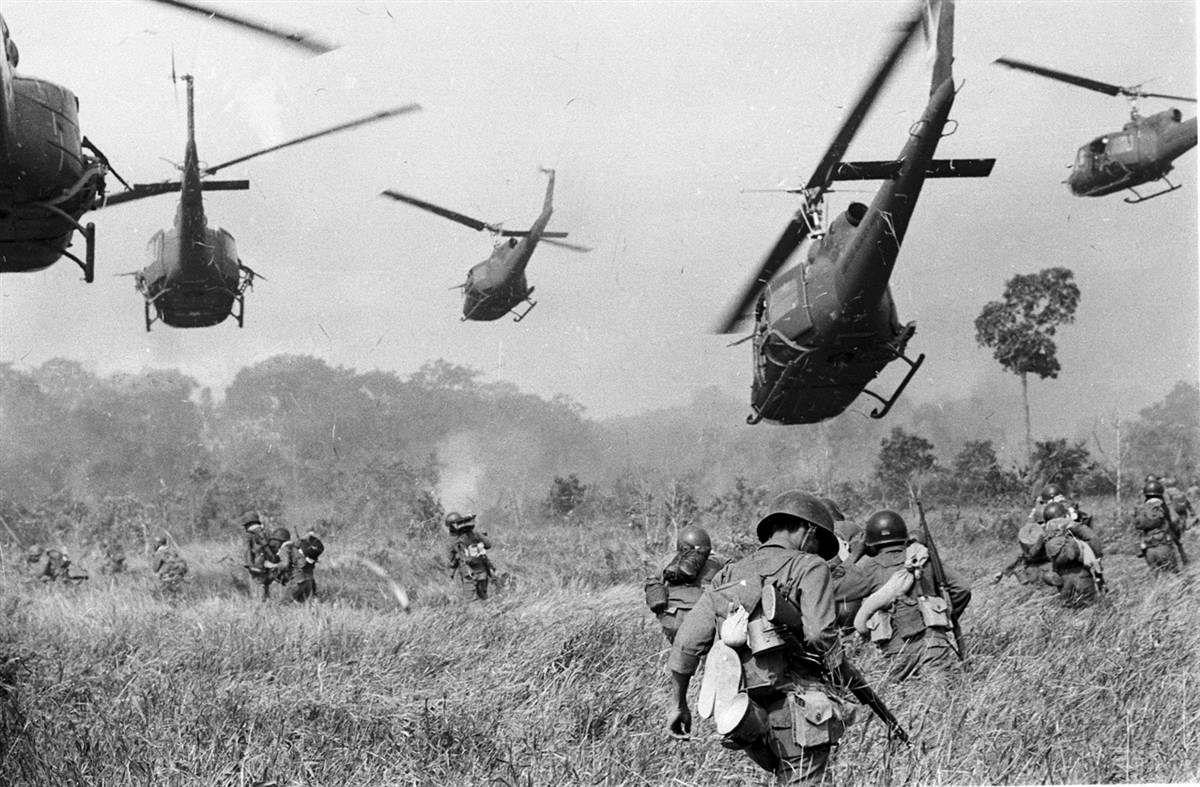 Hovering U.S. Army helicopters pour machine gun fire into a tree line to cover the advance of South Vietnamese ground troops in March 1965. The troops were moving to attack a Viet Cong camp northwest of Saigon near the Cambodian border. (Courtesy of Vintage Everyday and US Archives)
Sgt. Barry Sadler's Pro-Vietnam anthem "Ballad of the Green Berets." Released at a time with high pro-war sentiments, was the #1 song of 1966

The Vietnam War was an extremely bloody and arguably the most divisive conflict in American History. Spanning a time frame of over a decade, almost 50,000 American lives were lost in the war, with many others who would never return home or would never be the same. Today, the conflict is almost universally derided as one of the largest mistakes in American History, for a multitude of reasons. A causal look back on the history of this time period would make one believe that the American public was virtually entirely against the war, with the content that has been preserved and remembered being that of the counter culture protest movements. The anti-war music produced in that time period still remains a popular form of music today, with the rise of many iconic artists and musicians such as Jimi Hendrix and the Rolling Stones.

However, it is a mistake to assume the entirety of the American public was in favor of the war. In 1971, the American Psychological Association ran a series of experiments around the nation, taking an indicator of how many people would protest the anniversary of the moratorium of the Vietnam War. It turns out, only about 50% participated in the organized protest, with the other 50% refusing to protest. There were many in the nation who believed that as a people we had to stop the protesters and support our troops overseas. As it would happen, these people also created music, some of which the songs were the hit songs of those particular years. Despite this popularity in their own day, these songs and musicians have been lost to history, almost totally having fallen out of our cultural conscience. How many people do we meet that can tell us about artists such as Sgt. Barry Sadler and Johnny Wright? This webpage and associated Research Op-Ed is dedicated to discovering why these artists have been lost to history, and bringing their music together to be listened to and enjoyed as the pieces of history that they are.

Dave Dudley"s "What We're Fightin For" was released in concurrence with the song "Vietnam Blues" between 1965-1966, became some of the top songs in country music.